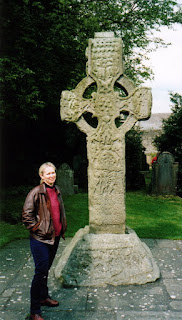 I have just discovered my Irish connection, so I thought it timely to post a travel story on Ireland I wrote back in 2001.
But first, the family history. My great-great grandfather, Charles Ainsworth was a 20-year-old woodcutter from Oxford, England who was transported in 1840 to Hobart Town, Tasmania for nicking some tools.
After serving a 10-year sentence, he married an 18-year-old Irish lass, Ann Carroll, who just the year before was transported to the penal colony as a dependant of her Irish convict mother, Ann Birnes, a widow whose crime was stealing sheep and potatoes to feed her children.
Together Charles and Ann ran the Man of Ross Hotel in Liverpool Street, Hobart Town and had four children.
I am inspired to know that the young couple overcame their harsh treatment to make a success of their lives. And I am thrilled to confirm what I’ve always suspected; that I have feisty Irish blood running through my veins!

This is my Love Letter to Ireland, which was published in the Sunshine Coast Sunday on August 12, 2001. I hope you enjoy a little trip to the delightful Emerald Isle.

Lost Aussie finds herself at home amid the charm and beauty of the Irish, to be sure, to be sure
When I first set foot on Irish soil, it felt like a homecoming. It stirred me Irish blood. It did me heart good. In a flash, some lost part of me was reclaimed.
We hit a pub in Dublin’s Temple Bar, ordered our first half pint of Guinness (not being big drinkers!) and Shepherds Pie and a mountain of chips. The raunchy music of the Pogues was pumping and the crowd was wild and rowdy. It was a bustling Saturday afternoon in the city and the excitement was so great for this Aussie gal I could barely contain myself.
I am 44 and embarrassed to admit it has taken me this long to re-connect with my heritage. My husband Andrew and I set off without our teenage kids for this overdue and craved-for trip. Yet we can’t blame ourselves too much for our tardiness in discovering our homeland.
Like most Australians we are victims of a great conspiracy to keep us
exiled on our far flung island. It’s a conspiracy of economics. For what hard working middle-income Aussie family can afford the exorbitant cost of overseas travel exacerbated by the crushing exchange rate of the sad little Aussie dollar, which is worth roughly one third of your Irish currency? If it’s a choice between feeding the family and an extravagant OS holiday, well, the realities of life take precedence. We devoted two decades to raising kids and being slaves to a mortgage and careers before we could splurge 20,000 bucks on a six-week jaunt through Europe, England and Ireland.

Condemned to the Tyranny of Distance
And Australians are also encouraged to stay home on our remote shores by the tyranny of distance, that poignantly accurate phrase made famous by historian Geoffrey Blainey. We are not condemned to sail dangerous seas in squalid ships anymore. We enjoy the creature comforts of modern air travel; those cute little eye shades, rich food and in-flight movies. However 24 hours on a flight does play havoc with one’s body clock and is not for the faint hearted or feeble. People who live in Europe, the UK and US can zap anywhere in the world in a fraction of the time and cost.
Within days of arriving in Ireland, I realised how isolated and cut-off I am from the rest of the world, my roots and my personal history. I felt cheated.
Two hundred-odd years ago the English ruling class tore us from our families, blood ties, communities, culture, religion, history and heritage and hurled us across to the other side of the world. We are a displaced, disconnected, confused people. No wonder Australians, especially our youth, are so lost. No wonder we suffer an inexplicable aching emptiness.
Our predecessors were transported, in some bizarre and cruel social experiment, for minor offences of theft, born of abject poverty; banished to a harsh wilderness that didn’t belong to them but to a strong, intelligent indigenous people.
We live in Australia with plenty of sunshine and a magnificent natural environment (which tourists devour and adore) but we are mostly devoid of history, culture and meaning.
Enough belly aching. I’m here to tell you what I love about Ireland. I love the entire country, from lush farmlands dotted with dozy sheep and pretty townships pulsing with the slow rhythm of daily life to the rugged coastline and gentle rivers and lakes.
Andrew and I marvelled at the spectacular Cliffs of Moher one misty morning before heading for the vibrant university town on Galway and visited Yeats’ grave in picturesque Sligo. 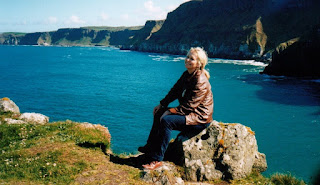 Hugging the northern coastline overlooking the pristine Atlantic Ocean we reached the awe-inspiring Giant’s Causeway and stood gleefully on top of the world! So much natural beauty and splendor in such a tiny, accessible country; tiny, that is, to an Australian’s perception.
We loved the small scale of Ireland which would fit 90 times into Australia’s land mass. We loved the fact we could drive for five minutes along quiet, safe roads and find ourselves in a different town. We delighted at the close proximity of community life; the strong family and friendship connections.
Just as Australians are isolated from the rest of the world, we are isolated and disconnected within our own vast, inhospitable country; east and west, north and south, divided by endless dusty red desert.
Families often live apart in different states, separated by thousands of miles. Our rural folk live on remote homesteads an hour’s drive from their nearest neighbour or shop. And in towns and cities our suburbs are sprawling wastelands of segregated quarter-acre blocks where locked inside four walls, a struggling young mum or sad old man could die of despair and loneliness.
In contrast, Ireland offers close community and a visible history; medieval castles, ancient buildings and churches, Celtic high crosses and sacred ruins. To be surrounded by history gives a depth of meaning and security, a solid foundation of knowing where you’ve come from.
Tour by Folk Songs
I’ve been a staunch folkie since I was 18 and sipped my first red wine in the Dan O’Connell pub in Melbourne. So it was logical that we should do a folk tour of Ireland. I insisted we visit every placename that has ever rated a mention in any heartfelt ballad. And since the Irish love to sing about every township and geographical feature of all 32 counties in the seven regions of their beloved country we were compelled to cover a lot of territory.
Heading south out of Dublin, in a clockwise circuit, we found ourselves on Dingle Beach (Song for Ireland) in County Clare (thank you Ralph McTell); seeking out Donegal Danny in his hometown, visiting Derry (The Town I Loved So Well); Carrick Fergus (traditional plaintive lament); Carlingford and Greenore (jaunty ditty rendered by the Dubliners) and many more m 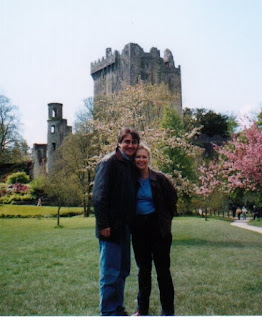 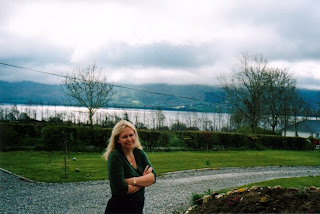 Posted by Diane Priestley at 6:37 PM No comments: