Janet Creates A Safe and Happy Home for Farm Animals 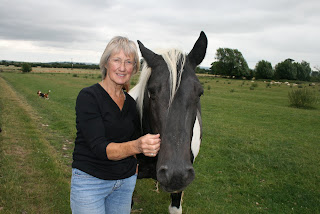 Janet Taylor is celebrating her 70th birthday but could pass for mid-50s. Maybe lugging hefty hay bales keeps her looking young and slim or maybe her compassionate heart is her secret to vitality?

Twenty two years ago when she was a feisty, investigative journalist, Janet uncovered a scandal that turned her life upside down. She followed lorries across Europe carrying animals for export to North Africa for slaughter. She witnessed shocking cruelties that broke every rule in the book and the newspaper expose forced the House of Commons to bring in an overnight ban on live export.

Not long after that disturbing revelation, she visited a livestock market and was horrified by the appalling handling of animals. She convinced her editor to do a report on the mistreatment of farm animals in markets.

“I had to buy the animals that were ill and diseased because no-one would have believed me. So I went to markets in the Midlands and Wales and bought up a collection of animals and took them straight to the vet who was equally as horrified. We met with animal welfare groups to draw attention to their plight.”

Her series of articles in News of the World sparked public outrage. But the success of the campaign also left Janet with a slight problem. She now had about 80 animals and colleagues suggested she start a sanctuary!

Donations flooded in and actress Joanna Lumley threw her celebrity support behind the sanctuary. After renting a series of small holdings, 13 years ago, a loyal supporter set up the 70-acre sanctuary at Manor Orchard Farm in Evesham, Worcestershire.

So today we are sitting at the cluttered kitchen table having an interview with Puppa, a fluffy poodle-cross-terrier squatting on the table between us, like a jealous toddler vying for mum’s attention. 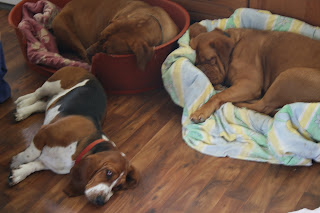 Two giant ginger-coloured Dogne de Bordeaux hounds called Rosie and Ruby snooze in their baskets while Tilly, the doleful-eyed, droppy-eared Bassett sprawls on the floor and Beatrice, the shy German Shepherd mooches in the laundry. To add to the cosy scenario, two African grey parrots let out the odd screech and dance on their perches and large fish tanks take up bench space. Clearly this is the domain of an animal lover.

Outside in the barns and fields dedicated volunteers are tending the happy residents of Britain’s first farm animal sanctuary. More than 600 animals and birds rescued from abuse, neglect, slaughter and abandonment have found a miraculous reprieve from suffering and death and enjoy an idyllic life here. 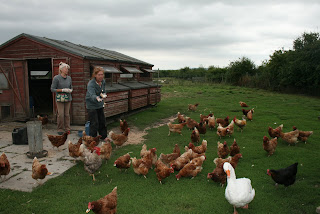 The menagerie includes 430 sheep, four cattle, 12 horses and ponies, 13 pigs, countless bedraggled rescued battery hens now radiantly healthy and glossy in the dappled sunlight, a gaggle of quirky geese, ducks and turkeys, a few lucky rabbits, five mischievous dogs and an assortment of feral cats. Janet and the volunteers know every animal by name and each animal has a dramatic triumph over tragedy tale to tell.

Janet tells the story of Christian. “He was the sad little cream-coloured blue-eyed foal I bought out of Henley Market in the autumn. He was just one of hundreds of similar foals born every year who are unwanted. There’s so much over-breeding of poor stock in this country, which leaves huge numbers of animals, particularly pony foals, with no value at all. There isn’t a market for them.

“At a late autumn sale in a Welsh market 33 horses and ponies were left unsold and abandoned, just left behind for someone else to deal with. That turned out to be the slaughter man, who then decided that even on offer for £3 each they weren’t worth collecting. So they were left, with no one responsible to give them food and water until a small equine charity stepped in and found temporary places for them until homes could be found.

“We offered to take a foal to keep Christian company, and so a skinny, scruffy little colt arrived, who we’ve named Connor. Connor doesn’t like people much and I can’t say I blame him. It’s possible that the only contact he’s ever had with a member of the human race has been a smack in the face or a well-aimed kick.”

In another recent rescue, the sanctuary saved eight young sheep. Janet wrote in her newsletter: ”When I saw them I wanted to weep.

Only one of them was capable of standing up and he had weak, misshapen back legs that he dragged behind him. One little sheep had his toe reduced to pulp from infection that had been left untreated. Their bellies were soaked in urine where they’d been lying in dirty bedding and their fleeces were ragged and dirty.”

The motley collection was lovingly tended by the vet and volunteers and Janet reports: “These disabled little animals have stolen our hearts and we’re determined that however long it takes and whatever it takes we’re going to get them back on their feet.”

Why would anyone bother rescuing and pampering farm animals? Janet explains: “These animals have so many people who care about them which is amazing because they’re not companion animals, they’re not wild, exotic or endangered animals, but commercial animals who only exist to provide meat or milk. These lovely animals are amongst the most abused in the world.”

“Farm animals are not considered to be worth caring for. They are treated like just another food product although unlike fruits and vegetables, they bleed when they are injured. They die from fear and stress. They suffer distress when their young are taken away from them. They are often exploited until they are too old to stand.

“There are very few places where farm animals can find sanctuary to live out their lives in peace, with kindness and respect.”

Why does Janet continue to take in animals when they already have so many? She says: “The simple answer is because when they’re brought here, there’s nowhere else for them to go. We’re the end of the line. People have little compassion for farm animals.

“I remember when I stood in a Dutch veal-rearing farm watching tiny British-bred calves being unloaded into their concrete crates where they were going to be kept for the next few months, in the dark with no bedding and no companionship. I wept as one distressed, bewildered little heifer pushed her head out of the crate and began to suck on my fingers, the last bit of comfort she was ever going to get in her short life.

“I watched the smiling female farmer and wanted to rage and scream in her face. She would have thought I was mad. People who are so completely devoid of all compassion always think the rest of us are mad. I thank God for mad people.”

A staunch vegetarian, Janet is opposed to killing animals for meat. She says: “There is no such thing as humane killing. It’s a contradiction. To take a healthy animal only a few weeks or months old and kill it is never humane.”

But a lucky few escape their miserable fate and are blessed to live out natural lives on the lush fields of Worcestershire. Janet says: “We watch these animals become comfortable and confident. We see their characters develop. We admire their intelligence and the way they embrace their peaceful surroundings. We watch them begin to play and finally become content. They form close companionships and soon recognise the people who care for them.” 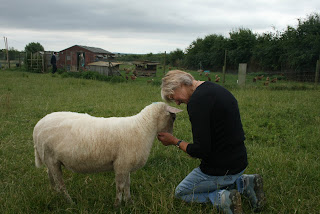 She admits her favourite animals are sheep.

“I love sheep because they are so misunderstood. Farmers think they are stupid but they are prey animals constantly in a state of tension when being rounded up by dogs they see as predators. They are tuned into any slight movement.”

“Little lambs are born so playful, full of joy, with such optimism and sense of fun. They are so trusting and have so much pleasure in being alive and yet their lives are so brief.”

She has a soft spot for Snowdrop, one of triplets born last year to Sunny, a tiny Welsh ewe. Snowdrop, pure white with transparent pink ears, weighed in at 2lbs 6oz and was rejected by mum. Bottlefed by Janet, she thrived in the shelter of the barn and has now graduated to the paddocks with the other orphan lambs, Adam, Annie and Minnie.

But it’s not all fun and games on the farm. The relentless grind of daily chores is gruelling, especially through the bleak winter months when the horses are stabled and require a daily mucking out and the sheep are handfed hay in the shelter of the barns.

Come spring the sheep are given a complete overhaul of teeth, feet and worming treatments. If that sounds easy, imagine first catching each sheep and then trimming more than 1600 tough feet!

Then there is fence repairing, roof maintenance, gutter clearing, nettle bashing, shearing and tractor scrubbing! Janet is grateful to have David and Louise as full-time employees.

However the financial anguish is tougher than the drudgery. The sanctuary costs £2000 a week to operate and paying the bills is a nerve-racking challenge. The idealistic sanctuary relies on the generosity of about 360 supporters and has an enthusiastic band of followers on Facebook.

Janet is an extremely modest lady. She lost her ego somewhere between mucking out stables, trimming hooves and sloshing through mud at dawn but through the hard slog and close contact with her animal family she has developed a beautiful, caring heart and fierce fighting spirit devoted to creatures who can not defend themselves from human callousness.

Her good work was recognised this year when she was given an award for the Best Farm Animal Rescue by Wetnose Animal Aid at a ceremony in the House of Lords where eccentric animals lovers from around the country gathered in the hallowed halls of parliament.

The sanctuary’s financial struggles continue however Janet’s steadfast commitment remains to give the rescued animals a safe and happy home for the rest of their natural lives.

What can you do to help? You can visit the sanctuary on Open Day on Sunday September 5 or attend the Carol Service and Nativity on Saturday December 4 this year.

You can sponsor an animal of your choice and receive photos and updates or you can give family members and friends who have everything an unusual birthday or Christmas gift of an animal sponsorship.

Patron, Joanna Lumley has the last word: “It is such a joy to see the animals who have found their way to the sanctuary. They know they are safe. They look contented, confident and peaceful, the young ones so full of life. Not enough people seem to care about them, and there are not enough places for them to go. We need help from caring people to keep the sanctuary going.” 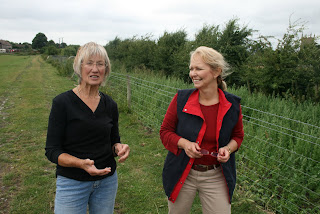 Posted by Diane Priestley at 1:54 AM 2 comments: