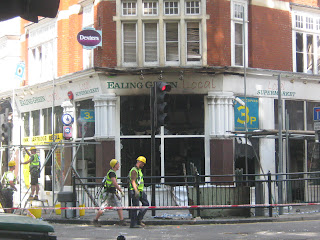 People across the UK and the world watched the horrifying images on television and You Tube in shock and outrage and asked the same question: Why?

The riots started on Saturday, August 6, in the northern suburb of Tottenham, sparked by the police shooting of popular gang member Mark Duggan on Thursday.

By Sunday night rioting spread east to Hackney and south to Brixton, Clapham Junction, Croydon and Peckham with mobs of youths, faces covered by hoods, swarming the High Streets setting cars ablaze and smashing shop fronts and looting with fearless contempt for the outnumbered police, powerless to stop them.

In Tottenham a carpet store and overhead flats were set on fire and gutted, leaving distraught residents and wide-eyed children stranded on the streets, homeless.

In a heart-breaking case, the Reeves Furniture Store, a beloved landmark in Croydon since 1867, was burnt to the ground and 80-year-old Mr Reeves questioned how his store, handed down through five generations, and surviving two world wars and the Depression could be maliciously destroyed by London’s own citizens.

While violent thugs menaced the streets north, south and east, West London, where we live, had been spared. But Monday night the rioting, far from abating, gained force as psyched-up gangs were directed by mass text messages and Twitter to catch trains to untouched suburbs.

Tuesday morning we woke to the news that our peaceful little Ealing Green, just a mile up the road, had been hit. Parked cars were set ablaze and the pretty cafes and shops that line the street opposite the park had been smashed up and looted. The corner Tesco store was stripped and even a baby store was ransacked and destroyed, the owner understandably devastated.

That afternoon, I visited the surreal aftermath and joined other locals wandering around in gloomy disbelief. All the shops, even the cheerful little health food store, were closed and smashed windows boarded up.

Do the young perpetrators have any idea of the loss and pain they have inflicted on business owners, families and whole communities? The damage bill is already £100 million, the wreckage incomprehensible. Hundreds of police officers and innocent people have suffered injuries.

By Wednesday there were 770 arrests. In a belated security crackdown 16,000 police officers were deployed to guard the streets of London and defiant shop owners organised their own numbers to protect their premises last night, restoring control. However gangs hit Manchester and other regional cities. In Birmingham three young men were killed when they were ran over by a car.

To counter despair, teams of upbeat residents in Clapham Junction pitched in to help dazed shop owners clean up the mess, proving that community spirit is strong and resilient.

An uneasy calm has been restored and now for the collective soul-searching and public debate.

During the laid-back summer month of August London slides into holiday-mode. While the grown-ups in charge were away the kids took to the streets to ‘play’. The Prime Minister David Cameron was recalled from his villa in Tuscany and the Mayor of London, Boris Johnston reluctantly cut short his break in the Canadian Rockies to face the mayhem.

Is this debacle an extreme case of school holiday boredom? What are the emotions driving the anarchy? Frustration and anger escalating to hatred and rage.

Led by hardcore gangsters, what have thousands of teenagers (and kids as young as nine) got to be so enraged about?

Many social commentators are blaming youth disillusionment due to chronic unemployment and lack of future prospects. With savage government funding cuts and massive job losses in countless industries, this is a generation with shrinking opportunities and crushed aspirations.

Ironically when I returned from the bleak smashed-up streets of Ealing, I tuned into Escape To The Country to watch a dull, middle-aged couple searching for an idyllic property in rural Sussex with a budget of £800,000.

Granted this couple have probably worked conscientiously in boring jobs for 30 years to acquire their nest egg but how can this young generation ever imagine such an affluent future?

Our Baby Boomer generation has forced up the cost of houses to exorbitant levels. So along with shrinking job prospects, any dreams of home ownership are almost impossible.

And yet this is a generation raised on the fantasies of a Celebrity Culture that lauds instant wealth and fame. Along with junk food, kids are fed a steady diet of junk values. They are indoctrinated with images of mega-rich movie stars and sporting heroes. These warped values don’t match the grim reality of life on council estates. The gap between rich and poor in 2011 is a fatal chasm.

Which brings us to another driving force in those young looters: gleeful greed. Some of the laughing youngsters caught on camera display real enjoyment in running off with ‘free stuff’. Today’s kids want quick pleasure fixes.

Armed with a sense of entitlement, they stole brand-name trainers, laptops, mobile phones and flat screen TVs in a rampage of opportunistic consumerism. And these kids believed they could steal with impunity.

Where do they learn such consequence-free greed? Could it be from grown-ups who take obscene salaries and get away with it? Do they see a class society where gross inequality is accepted and wealth and property is vested with a privileged upper class and revered monarchy while the poor face a lifetime of deprivation?

By the way, where is the Queen? She has made no comment. I assume that problems with riff raff on the street don’t concern her.

Yes this is not a ‘working class’ rebellion because there is no work. Joblessness is now generational and endemic. Most of the young looters are spawned by an impoverished ‘under class’. And yet poverty does not automatically lead to crime because crime, as we know, occurs at all levels of society.

There is another factor at work in the sub-culture of our youth. Violent video games and movies get boys and girls hyped-up on explosive warfare. Immature minds cannot distinguish between screen violence, which is deemed ‘entertainment’, and real-life. The thrills they get from destroying and shooting up imaginary enemies are easily transferred to real life. It is a thin line and once a few cross it, the mob will follow.

Violence. Youth are surrounded by it as the nightly news shows them adults waging war in countries all around them. Violent games action and real-life battles in Afghanistan, Iraq and Middle Eastern countries look like a great adventure.

Young people are impressionable and easily led. They take their cues from adult society and our society is steeped in war mongering.

Many outraged onlookers have pointed to a flagrant lack of morals in the rioters. What is lacking in their emotional repertoire? Concern, respect and empathy and compassion for others. These qualities can only be cultivated through role modelling.

If kids do not possess these moral restraints, what about their parents and other adults? The rest of us are asking where was parental control? In fatherless families there is often no guidance and discipline.

As well as asking why, here is another good question. Who? Just who are the sinister adult ring leaders? Juveniles are devoid of complex political ideologies. They might be pissed off but they cannot articulate anarchy, socialism or the fine points of social protest. As the weeks unfold, police must identify the faceless co-ordinators who mobilised the gangs using social media.

This crisis has prompted analysis of underlying issues. Grown-ups in the government, media, business, education, youth organisations, churches and all communities must scrutinise parenting, the break-down of the family unit, the lack of meaning and purpose, youth sub-culture and the future of this generation.

It is clearly a symptom of deep dysfunction when people attack their own communities, neighbours, family and friends. Such offenders must feel extremely disconnected, disenfranchised and marginalised.

As respected Channel 4 journalist Jon Snow wrote: “The ‘local’ is in trouble. You don’t destroy the ‘local’ you love and cherish. You defend it with all your might.”

If this terrifying tragedy was a crazed cry for attention, then young people have certainly got our attention.

Posted by Diane Priestley at 4:15 AM No comments: